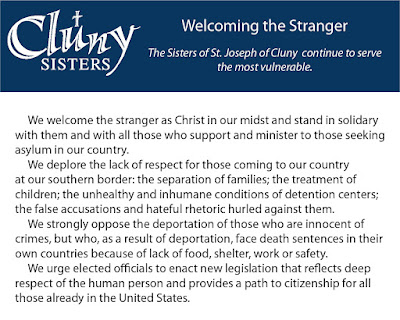 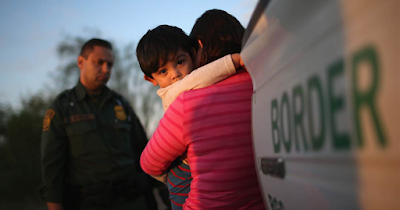 Who Is My Neighbor?

Inspired by the Gospel and Catholic Social Teaching, we honor the dignity of every person. As Pope Francis said: “These are not mere social or migrant issues… Migrants are first of all human persons.” We affirm the sacred human right of all people to seek asylum.

We are called by our faith to care for the vulnerable and challenged by our national values to promote the welfare of our children and to tend the common good. President Trump’s continued attempts to use the mistreatment of children to deter those seeking refuge and asylum in the United States is unconscionable. We strongly oppose the administration’s efforts to discard the Flores Settlement Agreement safeguards which protect the welfare of migrant children in U.S. government custody.

Children and families should never be incarcerated. First, because detention, even for a short period, has been proven to be detrimental to a child’s development, health, and well-being. Secondly, we know that there are effective alternatives to detention, including the Family Case Management System, that are less harmful and far more cost effective. Finally, it is clear that this new rule does not serve the best interests of children. Instead, it undermines existing child protections required by the Flores Agreement.

Join Us In Acting – Call on Congress to….

1.   Reduce Funding for Deportation, Detention, and Border Militarization and Support Funding for Refugee Resettlement and Asylum
When determining federal appropriations for FY 2020, we urge Congress to reduce funds for CPB and ICE Enforcement and Removal Operations. Refuse to provide any additional funding for a border wall; instead allocate resources to support refugee resettlement and access to asylum.
2.    Keep Families Together and Invest in Alternatives to Detention
We call for an end to family detention this year, by December 2019, and urge Congress to increase funding for less costly, more efficient, community-based alternatives to detention.
3.    Exert Robust Oversight over Detention and Uses of Federal Funding
We urge Congress to require additional inspections of ICE facilities, ensure ICE publishes public weekly reports, and create a detention ombudsperson to strengthen oversight. Congress should also prohibit federal funds from being used to: enforce Muslim or refugee bans, deport or detain DACA, TPS, or DED holders, and carry out immigration enforcement operations at “sensitive” locations including schools, churches, and hospitals.


Posted by clunyusandcanada No comments: 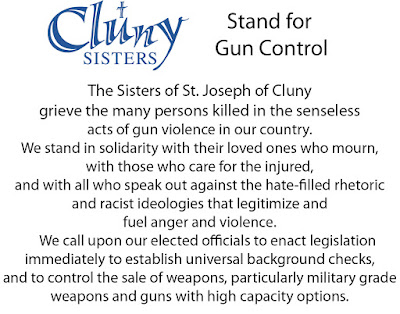 It’s been six years since the Sandy Hook massacre, and Congress still hasn’t done a thing.

El Paso. Dayton. Gilroy. Santa Fe, TX. Parkland. Sutherland Springs. Las Vegas. Sandy Hook. Columbine. Aurora. Virginia Tech. How many more innocent victims must die at the hands of an antiquated and oft-misinterpreted amendment?
Enough. It's time to say that thoughts and prayers are no longer enough in the face of gun-related tragedies. We need meaningful action.
We need commonsense gun control now, including the following:

Cluny Sisters join their voices with the multiple of citizens for Common Sense Gun Control.  Join us and others making known your stance regarding this epidemic of violence in our country.  In addition to our prayers and solidarity with the victims and communities shattered by this violence, we need to ACT. 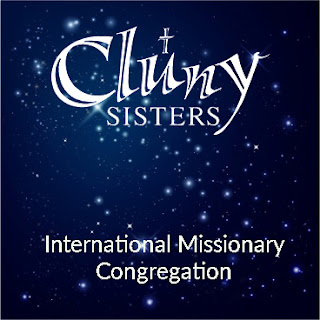 I have recently returned from the Leadership Conference of Women Religious (LCWR), National Assembly held in Scottsdale, Arizona. I support and affirm the Open Letter to President Trump by the 663 LCWR Members calling for him to end all divisive rhetoric and exercise the Moral Authority he holds as leader of our great nation.

The letter states in part, "We implore you to never use language that disrespects, dehumanizes, or demonizes others. We expect our president, and all who serve this nation as leaders, to be always mindful of the common good and the dignity of each and every person. You hold a position that has the potential to inspire the best of every one of us and we ask you to use this unique status to bring about healing and never seek to create division." Describing the practice we, as Catholic sisters, use to daily examine our own words and actions in light of our beliefs, we urge the president to adopt a similar practice in regards to use of his moral authority.

For the Sake of the Common Good
Mr. President,
We live in a world increasingly marked by hatred, brutality, and violent conflict. We see our own country threatened by increasing disparities in economic, political, and social power. We are caught in a political culture paralyzed by ideological extremism and hyper-partisanship. These are times that require exceptional insight and courageous leadership.
In the face of these unprecedented challenges, we are outraged and heart-broken when our political leaders appeal to our basest instincts and stoke the fires of fear that threaten to tear the fabric of our nation apart. We cannot, we will not, let the voices of hatred and fear carry the day.
Mr. President, we beseech you to end all divisive and polarizing rhetoric. We implore you to never use language that disrespects, dehumanizes, or demonizes others. We expect our president, and all who serve this nation as leaders, to be always mindful of the common good and the dignity of each and every person. You hold a position that has the potential to inspire the best of every one of us and we ask you to use this unique status to bring about healing and never seek to create division.
Read the full text here.

Join us in urging Mr. Trump to be the Leader that our nation needs and demands at this very violent and divisive time in our history.