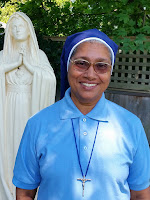 I was born in a large family of eight – four boys and four girls. Although my father was an aeronautic engineer he had to resign his work when my mother became unhappy. After witnessing some air crashes during demonstrations, and seeing close friends die from those accidents, she was convinced that my father’s work was too dangerous. So my parents came back to their native village where my father became a farmer and my mother a dutiful housewife.

I am the fourth in the family with two elder brothers, one elder sister, two younger brothers and two younger sisters. My elder sister was a Cluny sister named Sister Marie Noël. She died suddenly in 1985 at the age of 39. For some reason, I was my father’s pet and he would not give me permission to join the convent. I practically had to leave home without his consent except my mother, elder brothers and my father’s brother, who was our parish priest at the time, persuaded him to let me go. It was only just before my final vows that I got my father’s approval to continue my life in Cluny.

At the age of nine I was getting ready for my first Holy Communion. My new white dress, rosary, etc. were ready, but I had no veil or crown. I kept asking my mother about them and she just told me not to worry, “You will have them on the real day.” When that day came, I was all ready. I went to church very early. I saw a few women dressed in long brown habits with black veils. There were no women religious in my parish and I had no memory of ever having seen one, but these women were special. They provided me with a veil, crown and decorated candle. Then I saw them moving freely in the sanctuary decorating the altar and tabernacle with beautiful candles and vases of flowers.

In those days, all we saw at church was the long curtain dividing the sanctuary from the main body. The curtain was opened only for Mass. I always wanted to enter the sanctuary and said to myself, “If these women in those special dresses can enter the sanctuary, I will become one of them when I grow up.” Little did I know that the seed of a religious vocation had been sown in me. Then I forgot all about it, but my parents unknowingly nurtured it. They were very particular about our attendance at daily Mass, regular confession, catechism, and summer Bible classes. They also insisted that we join the Legion of Mary and participate in other forms of service.

When I finished my primary studies, I had to walk 15 kilometers each day and cross two rivers in order to attend another Catholic school. To my amazement, it was a convent school and most of the teachers were Sisters. Perhaps you have heard about Sister Alphonsa, the first woman saint of India – who was canonized by Pope John Paul II. She had worked in my school not long before I went there. By coincidence the school was named Alphonsa’s Girls High School. At the convent, there were a few older sisters who had lived with Sister Alphonsa. When we would visit them they would give us pieces of St. Alphonsa’s clothing or other things, asking us to keep them. They told us these things would be relics when Alphonsa was declared a saint. Laughing within, we would take the things and say to one another that those old nuns were not correct in their heads. Later, as we crossed the bridge between the school and the convent, we would drop the ‘relics’ into the water and watch them float away. Little did we know that one day we would regret not having such precious possessions in our hands.

Most of our teachers lived very exemplary lives. After school, they would take us to visit the terminally ill, old, infirm and homebound. They would also ask us to bring milk, fruit, vegetables or anything else we could share with the needy people we visited. At the same time, we would bring things to school to auction them in class and collect money for the mission. At home, we competed with each other to grow vegetables or raise chickens for eggs. We designated all of it as mission property. Sometimes I even stole vegetables from my brother’s garden to help the missions. Everyday my mother took rice for cooking. I always begged her to give me a handful from her portion. By the end of a week, or month, I would take ‘my rice’ to school for the mission.

When I finished high school, the Sisters asked me to join them but I said, “No, I am going to the missions – to Africa.”  Later, at a vocation camp organized by the diocese, I learned about the St. Joseph of Cluny Sisters. The name St. Joseph and the photo of a tall nun in the old blue habit just attracted me. There and then I decided to join the Clunys. That is how the little seed planted in me at the time of my first Holy Communion grew and matured. Now here I am working in Africa. When I do different chores in the Gambia, I think of Blessed Anne Marie writing in her letters about going from one department to another supervising workers. It gives me renewed energy to go on.
Posted by clunyusandcanada No comments: 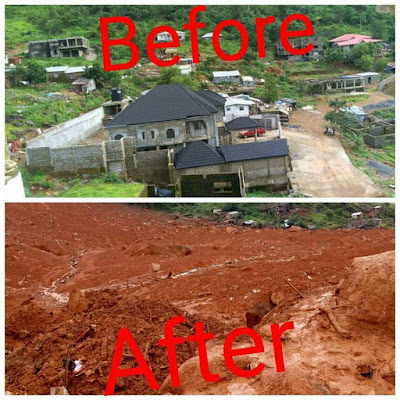 In 1945, in a village of Charlotte behind the Sugar Loaf Mountain, in the month of August a large portion of a hillside overlooking the village broke off which created a dam across a swollen stream and which caused torrential flood destroying a locality known as Bottom Shekeh destroying seven houses.

Sixty two years from then the same disaster has occurred on 14th August 2017, after a heavy downpour of rain throughout the night. Over 150 houses have been submerged in the mud; over 1000 people have been submerged in the mud. About 300 [500 as of last count] have been retrieved in very bad condition, parts of body cut etc. The only people that were saved were those who that were out of the area just before the incident occurred.

Around 3:00 am, there was a big bang and the people trembled. They were unaware of what was happening so they didn’t take it seriously. Those who sought refuge at the mountain were trapped and swept off by the landslide to Lumley, the other sea part of Freetown. Bodies were seen floating in the sea. A rescue operation team was set by the government to help retrieve the bodies. All NGOs in the country came to support and rescue the situation. The National Security Force (NSF) of government was the lead coordinating body. An emergency meeting was summoned and the needs were identified.

Caritas, the Catholic Church organization, was part of Multi Sectorial Strategic Planning Committee. The needs were Shelter, Medical Care, Clothing and Registration of survivors. Caritas Helped in the area of Medical, registration of survivors and provision of food. Sr. Josephine Amara, SJC, working at Caritas as the health coordinator joined the team to put things in place to help the situation.

The President has called for help from the international community and has declared seven days of mourning in the country in honour of those who lost their lives in the wake of the Monday 14th August, 2017 mudslide and flooding in Freetown. The National mourning starts on Wednesday 16th August to 22nd August 2017 during which period the floods should be flown at half-mast and at 12 midday, Wednesday the general public is expected to observe a minute of silence.
At the moment the President has invoked the Military Aid to Civil Community (MAC-C) in the national security threat as raised to the level 3 in response to the unfolding emergency situation in the country.

The incident occurred during our Chapter in Leicester [a mere 2.5 miles away] so we stopped to go the site to show our support for the Victims. Bishop Gabriel Kumordgi, our facilitator for the chapter, led us in a prayer for those who perished in the disaster. We met a woman who lost three children and her husband while she was marketing. A whole Baptist Church was having an all-night vigil, about 40 people in the church all died.

People are really traumatized. The sound of the ambulance siren brought back memories of the Ebola so we were all very sad. 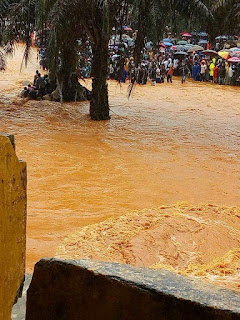 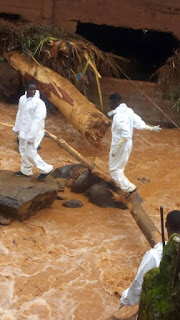 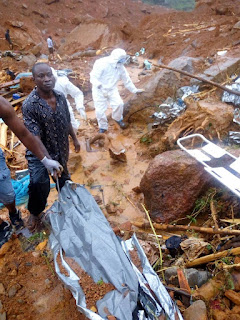 Let us hold the Cluny Sisters and peoples of Sierra Leone in prayer as they begin to put their lives back together following this horrific tragedy.

Donations can be made on our website: clunyUSandCanada.org
(Sierra Leone in memo)
or mailed to Cluny Sisters, PO Box 66, Newport, RI 02840


Posted by clunyusandcanada No comments: