Photos of the General Chapter
can be found at the following link:

Check once and awhile to see what is new!
Posted by clunyusandcanada No comments:

On Sunday, May 27th, the General Chapter of the Sisters of St. Joseph of Cluny opened with the celebration of Pentecost.  The General Chapter is a meeting that takes place once every six years with delegates from around the world gathering to set the direction of the congregation for the next six years. At this Chapter we have 90 delegates representing France and Switzerland; Spain; Portugal; Ireland and Great Britain; Angola and Guinea Bissau; Madagascar; Reunion; India and Nepal; New Zealand and Philippines; United States and Canada; Antilles and Guyane;  Haiti; Peru and Cuba; Senegal, Niger and Mali; West Africa; Central Africa; Seychelles and Tanzania; the Pacific; Brazil; Guinea; Mozambique; St. Pierre and Miquelon; Paraguay and Argenina; Australia and Papua New Guinea. There are 44 English speaking delegates, 27 French speaking delegates, 12 Portuguese speaking delegates and 7 Spanish speaking delegates. Truly a world wide gathering!

After a week of retreat, the work of the chapter begins. Keep us in your prayers as we seek the way forward! 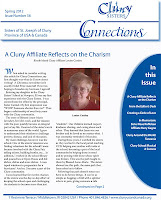 May 2012 issue of STOP TRAFFICKING

What do libraries and airlines have to do with trafficking?
Read this month's issue of Stop Trafficking to find out!
Download here!
Posted by clunyusandcanada No comments:

Happy Feastday to Cluny Sisters Around the World 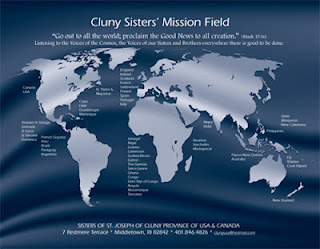 On 12 May 1807, nine young women pronounced their vows of religion before the Bishop of Autun in St. Peter’s Church, Chalon. "Now we are religious !" wrote Sister Anne Marie Javouhey who from now own could give free rein to her dynamic spirit. She obtained permission to use the Autun seminary which had become national property and there she educated young girls and trained them for manual work.
Posted by clunyusandcanada No comments:

On May 6th, 2012 the Partnership for Global Justice, the NGO that represents us at the United Nations, presented their 9th Annual Justice Award to The International Council of Thirteen Indigenious Grandmothers. In the fall of 2004, these women gathered from all over the world, thirteen indigenous Grandmothers from Alaska, North, South, and Central America; Africa; and Asia. They came together at the Tibet House Menla Mountain Retreat center in upstate New York. Within three days they formed a Global Alliance for the good of all beings. To read more about these amazing grandmothers follow this link. http://www.grandmotherscouncil.org/
Posted by clunyusandcanada No comments: 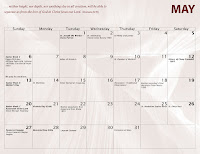 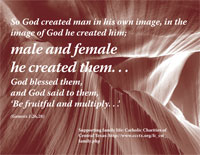 May's FREEDOM focus is that of the human person made in the image of God and the blessing of family life! Click on each calendar page to see a larger version!

The link highlighted this month takes you to 'Learning More About Catholic Social Teachings: Call to Family, Commuity and Participation.'
Posted by clunyusandcanada No comments: