The Sisters in the Province of USA and Canada have just become co-sponsors of the Stop Trafficking Newsletter. This newsletter, hosted by the STOP ENSLAVEMENT web domain, serves as a forum for exchange among religious congregations and their collaborating organizations:
• to promote awareness re. human trafficking;
• to exchange best practices in advocacy for and empowerment of survivors of human trafficking;
• to recommend actions to counter human trafficking.
Go to http://www.stopenslavement.org/ for more information.
Posted by clunyusandcanada No comments: 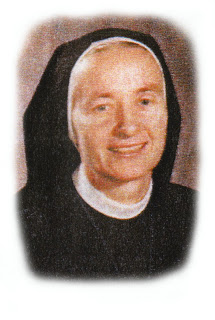 Sister Elizabeth Butler, a Sister of St. Joseph of Cluny for fifty-three years, died peacefully after a short illness on October 2, 2011 in Cluny Convent, Mary Star of the Sea, San Pedro surrounded by her religious community. She was born in Ireland in 1938 and professed vows in 1958. She trained for elementary education and taught in Hamilton, Ontario, Canada, Newport, Rhode Island and Wilmington, California. Her ministry also included community bursar, care of elderly ladies in Rhode Island, and, in recent years, co-directing the Poverty Program in Ss. Peter and Paul Parish, Wilmington. She walked on errands all over Wilmington and many knew her as “Sister Smiley”. After her many years of service may she now rest in peace.
Posted by clunyusandcanada No comments: 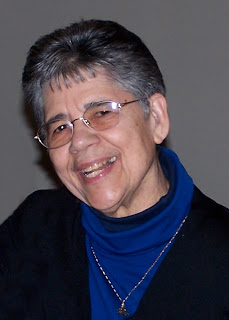 Sister Gisele Menos, a Sister of St. Joseph of Cluny, went peacefully to God at Heatherwood Nursing and Rehabilitation Center, Newport Rhode Island, on September 10, 2011. Born in Port au Prince, Haiti, November 29, 1928, Sister Gisele entered religious life on March 17, 1951 and made her first vows on September 12, 1953. After teaching for seven years in Haiti, Sister Gisele was missioned to the Province of USA and Canada and served for four years in California after which she served the people of Rhode Island for forty-seven years. Sister was the Director of Religious Education at St. Peter Parish, West Warwick after which she was Director of Religious Education at St. Michael's Parish in Swansea. During the last ten years, Sister Gisele served as the Religious Resource person for Cluny School in Newport, Rhode Island. After all her years of service, may she now rest in peace.
Posted by clunyusandcanada No comments: 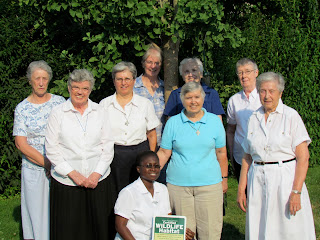 Sisters gather around the Gingko tree holding the plaque recently received certifying our 78 Carroll Avenue property in Newport, Rhode Island as a wildlife habitat. A large piece of land is not necessary to do this. One simply has to provide the four basic habitat elements needed for wildlife to thrive: food, water, cover, and places to raise young. Present from left to right are: (back row) Sisters Luke, Josephine and Anne Marie; (middle row) Sisters Eugenia, Andrew, Genevieve, Maria and Rachel; (front row) Sister Gertrude. Go to http://www.nwf.org/Get-Outside/Outdoor-Activities/Garden-for-Wildlife.aspx if you would like to find out more about having your backyard certified as a wildlife habitat.
Posted by clunyusandcanada No comments:

Seventeen sisters from the Province of USA and Canada gathered at the Center for Spiritual Development in Orange, California from May 16th to May 21st. Sister Joan Henehan, CSJ facilitated our days together. These were days of looking back to see where we had been and looking forward, preparing materials for our General Chapter which takes place in Paris, France in the spring of 2012. Sister Marie Cooper was elected as our delegate to attend the General Chapter along with Sister Joan Van der Zyden, Provincial.
Posted by clunyusandcanada No comments: