Today the General Chapter came to a close with a beautiful closing ceremony during which the various areas of the world led us in prayer and song. In the main chapel each commission symbolically presented its work and the delegates were sent forth by Sister Claire Houareau, the Superior General. Watch for more pictures!
Posted by clunyusandcanada No comments:

The General Chapter of the Sisters of St. Joseph of Cluny continues. On Friday the delegates elected eight sisters to serve on the General Council. They are as follows:

We ask you to keep each of these sisters and the whole congregation in your prayers as our chapter comes to a close on Wednesday, June 27.


On June 15th, Sister Claire Houareau was elected Superior General of the Sisters of St. Joseph of Cluny. Ninety delegates from around the world gathered in the Crypt Chapel for the election. Mgr. Michel Golfier presided as the representative of Mgr. Andre Vingt-Trois, Archbishop of Paris. After the election, the delegates individually congratulated Sister Claire and went in procession to the Motherhouse Chapel where the community members waited to greet the new Superior General.
More pictures will be posted on Cluny USA and Canada photos.

Pray for Election of Superior General

Tomorrow, June 15, as Sister Morag Collins completes her term as Superior General of the Congregation, the delegates of the General Chapter will elect a new Superior General. The mandate is for six years. As we, the delegates chosen to represent the congregation at this chapter, continue to discern and pray, we ask you to join us in prayer! Thank you.
Posted by clunyusandcanada No comments:

Sisters at Chapter Visit Cluny Around the World 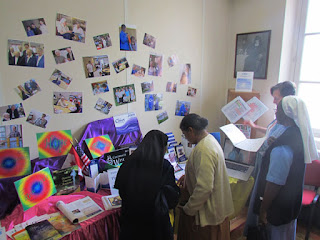 The General Chapter delegates are busy visiting Cluny missions around the world! Each Province, Vice-Province and Region has not only submitted a report but has also set up a 'market place'. These past few days time has been given to visit the various areas. Thursday was Africa and the Americas; Friday was India and Europe; Saturday concludes the markets with Indian Ocean and the Pacific. Each day the visits were followed by a plenary session in the 'Grande Salle' for questions, clarifications and comments. It has been an amazing journey to see Cluny in action around the world. Click on the link to see pictures of our time together.   Cluny Markets