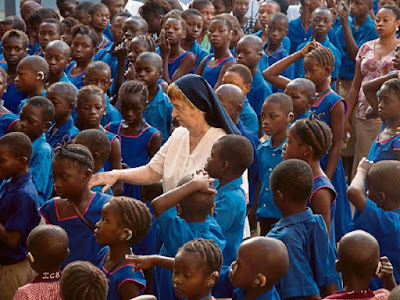 Cluny Sister Mary Dolores Sweeney, SJC is one of this year's recipients of the Irish Presidential award for Irish abroad for her role in coordinating a response to the Ebola crisis in Sierra Leone. Sister Mary has been missioned in the West African nation of Sierra Leone for 44 years. In 1979 she founded St. Joseph's School for the Hearing Impaired in Makeni, Sierra Leone.
Through a decade of civil war in the 1990's followed by the Ebola crisis and the continuing aftermath of both, the Cluny sisters have persevered with the help of many. During the Ebola crisis, Sister Mary said, “it was what came in from Dungloe, and Donegal, and friends, that kept us giving when there was nothing else.”
Cluny schools in Sierra Leone enroll about 2,000 students, and “many, many of those children would have lost their parents” to Ebola, Sister Mary said.
In the announcement of this year's recipients made by the Irish government it was noted that in establishing St. Joseph’s School for the Hearing Impaired, Sister Mary “has given education, skills training and life opportunities to the most vulnerable of people”.
The award will be presented in December.

To listen to an interview with Sister Mary, Follow this link:

My parents were Luka Jammeh and Marie Rose Badjie Jammeh both of blessed memory from Latrikunda German, The Gambia. Out of five children in the family, three are boys and two girls, I am the last child.

In 1999, I attended a vocation rally in our school, St Peter’s Technical Senior Secondary School at Lamin, The Gambia. After listening to the different inputs, I was inspired to become a religious one-day. As time went on, I forgot about it. After finishing my senior secondary school, I joined the world; enriching myself with money and worldly things. I was so busy with work and was part of a small Christian community building up the kingdom of God in our own locality.

One fine day early 2002, during morning mass, the Gospel reading spoke about the call of Matthew the Levi. The celebrant spoke about vocations to the priesthood, Religious Life etc. I was challenged during his reflection and I asked myself: what is God asking me to do now?

After mass, on my way to work, I happened to meet with three Cluny sisters, they were Srs Marie Simone, Clare Stanley and Bernadette on their way to the novitiate community. I expressed the desire to them to be part of them. The joy in which I was welcomed gave me the courage and zeal to come. They invited me to visit them after work, which I did. Sr. Clare Stanley was on visitation by then.

I did my pre-postulancy and the time came for me to let go of so many things: my family, work, friends etc. It was not easy for my family and work place. At that moment I discovered the plans my family had for me. I had to let go and invite God to be part of my life.

I trusted Him whom I have decided to follow and serve, indeed am grateful for so many graces He has bestowed on me. As I narrate my vocation story, I thank God for my family and all those who have contributed in molding my life. I am proud to be part of the Cluny family. I am happy to meet so many good and generous people along the way and I pray that God will continue to bless you. Thank you Sr. Luke Parker and sisters for every thing during the mission appeals in the summer.
Posted by clunyusandcanada No comments: